1,000 Christmas greetings from the United States for Nursing Home Residents

Over 100 volunteers from the US charity have come together to create 1,000 uniquely different postcards that will be sent to residents in nursing homes across the country. The general theme of the postcards is they depict traditional Christmas images along with symbolism of hope.

Kelly Burns, Program Manager and Art Therapist with the Stars of Hope Program states: “We are delighted to wish residents in Irish nursing homes a very happy Christmas from across the Atlantic and to bring a message of positivity to these very special people. It has been such a difficult, upsetting and worrying year for residents in nursing homes and care homes and this was also the experience for residents in the United States. We understand that isolation and loneliness is of great concern, both in Ireland and in the US, for older adults during this pandemic as they have been separated from their families and loved ones more than anyone else. This can greatly affect both physical and mental health so we hope these postcards can help strengthen that sense of connection to others and they can know they are not alone. We’ve also witnessed the tremendous resilience and positivity of these people who are an inspiration to us all. Our volunteers are delighted to express solidarity with Irish nursing home residents and to wish every one of them a very happy Christmas.”

Stars of Hope became aware of and was inspired by the An Post Care Homes Community Focus initiative encouraging people to write to nursing home residents and has partnered with NHI to reach out to Irish nursing homes.

Kelly adds: “We appreciate it will be a very different Christmas for nursing home residents and we hope the 1,000 messages being sent across the Atlantic will bring them some joy, hope and a knowledge people beyond Ireland have them in our hearts.”

Tadhg Daly, Nursing Homes Ireland CEO states: “It is extraordinary to realise a group of people in the United States have devoted time to bring Christmas greetings together for residents in Irish nursing homes. When Stars of Hope reached out to NHI we were moved to realise nursing homes residents thousands of miles away are in their thoughts ahead of the Christmas season. We are hugely grateful to all involved for their kindness. People have really come together to rally around nursing home residents this Christmas and we are heartened by the gestures of support and solidarity at this special time of year. Stars of Hope Christmas greetings represent a hugely positive and kind gesture.”

Stars of HOPE, started by the New York Says Thank You Foundation in 2007, helps people recover from traumatic events through creative therapy. Stars of HOPE serves individuals, families, groups, or communities surviving a traumatic event. Each individual is viewed as having the potential not only to survive but also to thrive. Stars of Hope seeks to enable each person to realise the future that they imagine, aware this is only possible with healthy, supported families and communities, particularly in times of crisis.

Media Interviews will be facilitated by Michael McGlynn, NHI Communications and Research Executive, who can be contacted at 087 9082970. Kelly Burns, Program Manager of Stars of HOPE, will be available for online interviews and can be reached at [email protected]. Note, given differences in time-zones, Kelly is available after 2pm Irish Time. 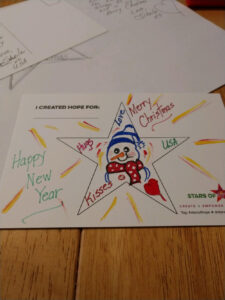 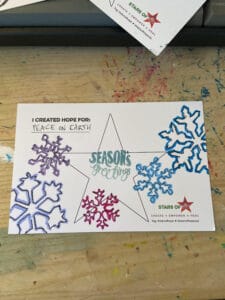 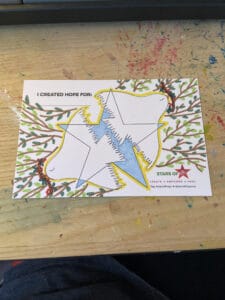